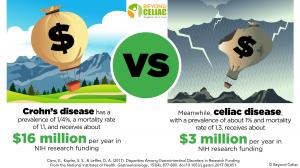 Beyond Celiac and the scientists we work with firmly believe a cure for celiac disease is possible by 2030. Making investments in critical research will get us to that goal.”
— Ken Kilgore, PhD, MBA, Beyond Celiac Chief Scientific Investment Officer

AMBLER, PA, UNITED STATES, November 23, 2021 /EINPresswire.com/ — The National Institutes of Health (NIH) announced new funding to support research specifically aimed at celiac disease. In their Notice of Special Interest (NOSI), they seek applicants for NIH grants supporting research on the origin or cause of celiac disease; the development of celiac disease; the identification of therapeutic targets; and the development of therapies or strategies to prevent, manage or treat the disease.

Beyond Celiac lauds this announcement, noting that in a 2017 review of funding, celiac disease was the least funded of all GI-related disorders.

Today’s posting from the NIH was precipitated by the March 2021 virtual workshop National Institute of Allergy and Infectious Diseases (NIAID) Accelerating Progress in Celiac Disease, which included celiac disease experts and patient representatives. NIH has the power to encourage research in desired areas, but their last request for funding applications for celiac disease was made 22 years ago.

According to the 2017 commentary, disparity in NIH funding may be a result of varying numbers of established research programs to recruit young investigators, fewer grants submitted because of a lack of investigators in the field due to poor funding, and narrow expertise of the peer reviews on NIH review committees.

Since that report came out, Beyond Celiac has invested nearly $2M in a number of research projects that support early career investigator grant awards in order to encourage researchers to consider a career in celiac disease study, in addition to supporting established investigator grant awards and research projects. We hope this research will lead to strategies to identify celiac disease earlier, studies revealing that celiac disease affects much more than the gut, and propel the development of potential treatments for all symptoms.

Those interested in applying for grants can find more information on the NIH website. Beyond Celiac also awards grants regularly and welcomes support for research. Together we can find a cure for celiac disease.