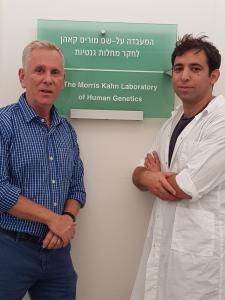 Hyperactivity in the mutant mice: 6-minute video capture of a CDH2 mutant mouse (right) and its healthy non-mutant sibling (left).

We now have novel insights to the heredity and molecular mechanisms of ADHD, opening new venues for diagnosis and drug development.”
— Professor Ohad Birk

BE'ER SHEVA, ISRAEL, November 10, 2021 /EINPresswire.com/ — Attention deficit hyperactivity disorder (ADHD) is a common childhood-onset disorder with unusual levels of hyperactivity and trouble focusing attention on a single task. While there is clearly a genetic predisposition to ADHD, the genes and the molecular mechanism of this common disorder are only partly known.

A study published this week in Nature Communications demonstrates that a mutation in a single gene, CDH2, can cause ADHD. Moreover, insertion of the human mutation in the homologous mouse gene using CRISPR, caused hereditary hyperactivity in mice. CDH2 encodes N-cadherin, which is known to act in formation and activity of synapses in the brain. The study further demonstrates that the mutation in CDH2 alters the activity of N-cadherin, affecting downstream molecular pathways and dopamine levels in both the ventral midbrain and prefrontal cortex, brain structures known to be involved in ADHD. Thorough electro-physiological and molecular analysis of neurons of the mutant mice demonstrated the precise effects of the mutation on synaptic transmission, with impaired presynaptic vesicle clustering, attenuated evoked transmitter release and decreased spontaneous release.

The study was done as part of the MD-PhD thesis of Daniel Halperin, guided by Prof. Ohad Birk at the Morris Kahn Lab of Ben Gurion University (BGU) and the Genetics Institute at Soroka Medical Center. As head of the Genetics Institute of Soroka Medical Center and the Morris Kahn Human Molecular Genetics Lab at BGU, Prof. Ohad Birk’s revolutionary work has solved the complicated genetic puzzles rippling through the Bedouin community. Prof. Birk’s research lab has deciphered the molecular basis and mechanism of more than 40 human diseases, including some of the most prevalent severe hereditary diseases in Arabs and in Jews. Also participating in this study were Dr. Alexandra Stavsky, Dr. Daniel Gitler, Dr. Gal Meiri and members of the Birk lab and the Genetics Institute. The study was supported by the Israel Science Foundation and the Morris Kahn Foundation.

The study demonstrates that a novel mutation in CDH2 is associated with familial ADHD, through impaired presynaptic vesicle clustering, attenuated evoked transmitter release, decreased spontaneous release, and reduction in dopaminergic distribution within limbic pathways. The investigators delineated the role of CDH2-related pathways in the pathophysiology of ADHD. Besides the scientific importance of the findings in clear delineation of a novel genetic basis and molecular pathways for ADHD, both the mutant human cells and the mouse strain carrying the human mutation can serve as an effective model system for discovery of novel medications for ADHD. Such studies have now been initiated by the Birk team at the National Institute for Biotechnology in the Negev (NIBN).