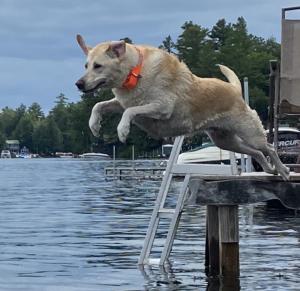 Zoey Rose, a Labrador retriever, experienced an improved quality of life after being treated with VetStem Cell Therapy for Hip Dysplasia.

POWAY, CALIFORNIA, US, November 9, 2021 /EINPresswire.com/ — Zoey Rose, a Labrador retriever, was only six months old when she was diagnosed with hip dysplasia. Hip dysplasia is a deformity of the ball and socket hip joint that occurs during growth. The deformity results in joint laxity (looseness) and eventually leads to osteoarthritis (OA). OA is a painful condition that can greatly reduce a dog’s quality of life.

At the time of Zoey’s diagnosis, her hip joints were not yet arthritic though she did experience some pain after activity. Her owner elected to take a proactive approach and had Zoey treated with VetStem Cell Therapy when she was around a year old. To begin the process, Zoey’s veterinarian collected fat tissue from her abdomen during a minimally invasive anesthetic procedure. Once collected, the fat was aseptically packaged and shipped to the VetStem laboratory in Poway, California. VetStem lab technicians processed the fat to extract and concentrate the stem and regenerative cells contained therein. Zoey’s cells were divided into doses and three stem cell injections were shipped to her veterinarian for treatment while the rest were put into cryostorage. Approximately 48 hours after the initial fat collection procedure, Zoey received one stem cell injection into each hip and intravenously.

According to Zoey’s vet, her right hip responded well to the stem cell treatment but her left hip had minimal response. Zoey’s owner continued to be proactive and elected to have Zoey’s left hip retreated approximately five months after her first treatment. Her extra stem cells were stored from the initial fat collection, so no additional fat collection procedure was required. This time, Zoey received one injection into her left hip and one intravenous injection.

Zoey responded so well to the treatment with VetStem Cell Therapy that she did not require another treatment until nearly seven and a half years later when she was nine years old. Her owner noticed that she no longer wanted to climb stairs and would whine at the bottom instead. By this point, the osteoarthritis in her hips had progressed so once again, she received treatment using her stored stem cell doses. She received one dose into each hip and one intravenous injection. After this treatment, her owner stated, “I have no doubt this has made a healthy life for my best friend. You can see the improvement immediately…like shaving years off your dog’s life in the other direction. Giving back years actually! I am so thankful to be in today’s time where this has been available. Zoey would not have the quality or longevity of life without these beautiful stem cells.”

The following year, at approximately ten years old, Zoey received another stem cell treatment identical to her last. Due to her age and the fact that osteoarthritis is a degenerative disease, meaning it will continue to progress, Zoey may benefit from routine treatments with VetStem Cell Therapy. Fortunately for Zoey, her owner is very proactive in keeping Zoey happy and comfortable.

Osteoarthritis is one of the most common diseases in dogs and pain associated with osteoarthritis can greatly reduce a dog’s quality of life. According to surveys answered by owners and veterinarians, greater than 80% of dogs showed an improved quality of life after receiving VetStem Cell Therapy for osteoarthritis. A peer-reviewed study of dogs with chronic osteoarthritis of the hip found that stem cells reduced pain and lameness. Stem cells are regenerative cells that can differentiate into many tissue types, reduce pain and inflammation, help to restore range of motion, and stimulate regeneration of tendon, ligament, and joint tissues.

About VetStem, Inc.
VetStem is a veterinarian-led Company that was formed in 2002 to bring regenerative medicine to the profession. This privately held biopharmaceutical enterprise, based near San Diego, California, currently offers veterinarians an autologous stem cell processing service (from patients’ own fat tissue) among other regenerative modalities. With a unique expertise acquired over the past 15+ years and thousands of treatments by veterinarians for joint, tendon and ligament issues, VetStem has made regenerative medicine applications a therapeutic reality. The VetStem team is focused on developing new clinically practical and affordable veterinary solutions that leverage the natural restorative abilities present in all living creatures. In addition to its own portfolio of patents, VetStem holds exclusive global veterinary licenses to a large portfolio of issued patents in the field of regenerative medicine.