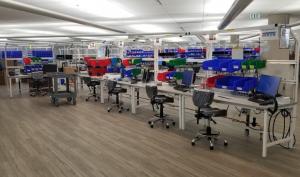 In 2020, Formaspace responded to an urgent request from GM to assist in their round-the-clock effort to create a ventilator factory in Indiana by manufacturing new workstations for their production line within a matter of days. 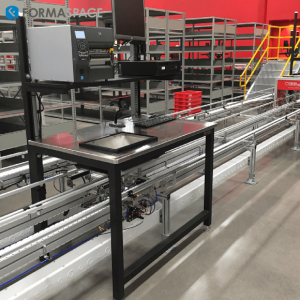 Formaspace can not only build custom laboratory furniture, we can also manufacture custom solutions for your fill-to-finish production lines, such as the installation shown above we built for a large pharma provider. 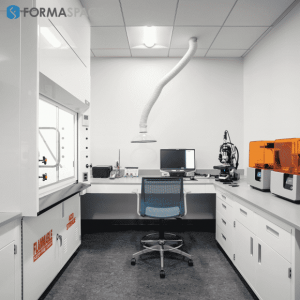 Find out how Moderna and Pfizer-BioNTech are using DNA-based replication technology to produce vaccines in a way that’s similar to 3D Printing.

Choosing an mRNA-based system has other advantages, as we’ll see shortly, including a much simpler manufacturing process that does not rely on any animal or plant cells for replication.”
— Formaspace

AUSTIN, TEXAS, UNITED STATES, October 28, 2021 /EINPresswire.com/ — How Close Are We To 3D Printing Molecular Structures, Such As Vaccines?

One of our readers recently asked: “if we can “3D print” human organs for scientific research, why can’t we also ‘print’ vaccines or other molecular structures?”

Indeed, since we last wrote about the possibilities of creating human organs on a 3D printer, researchers are making important advances at new startup companies, such as YCombinator’s Volumetric, as well as at NASA, which is planning to test the efficacy of “bioprinting” artificial organs in space.

Given that background, the question is entirely reasonable.

So, is it possible? Can we print molecular structures, such as vaccines, on a 3D printer?

The answer is that we are closer than you might think.

What Kind Of Vaccines Can Be Designed On The Computer?

Let’s break this question down into its components, starting with the vaccine design process, and ask the question again.

Is it possible to design vaccines on the computer, much like a product designer would use a CAD program to design a new part to be made on a 3D printer?

The answer is a definite yes, and the millions of people around the world who received a double jab of Moderna or Pfizer/BioNTech Covid-19 vaccine are proof that the process works.

In fact, senior leaders from both Pfizer/BioNTech and Moderna have been quoted during interviews that one of the quickest steps in developing the new Covid-19 was the design process, which both companies claim they each completed record time after receiving the viral genomic code published by Chinese researchers on January 11, 2020.

How Can A New Vaccine Design Be Accomplished So Quickly?

How could the new mRNA Covid vaccines, which Moderna co-founder Derrick Rossi says at his company designed in just a couple of days, be developed so quickly?

Part of the reason comes from the inherent simplicity of an mRNA vaccine itself, which has a very important but uncomplicated job – it jolts the human body’s immune system in action by circulating replicas of features found in the real virus.

As these replicas circulate through the body, the immune system learns to recognize and attack the intruder, e.g. the vaccine, giving us immune protection against the real virus should we be become infected in the future.

What’s The Process For Creating An MRNA Coronavirus Vaccine Design On The Computer?

So how do vaccine designers go about it?

The first decision that vaccine designers have to make is to determine which antigen feature of the live virus the human immune system needs to “learn” to provoke a strong immune response.

In the case of the coronavirus, the answer is obvious: it’s those distinctive “spikes” we’ve all become familiar with that are found on the outer envelope of the Covid 19 virus.

And, because these spikes are described in the virus’ genomic code, it’s a straightforward process for the vaccine designer to copy the genetic code of the spike structure to create a similar spike structure in the new mRNA vaccine.

Thus when the mRNA vaccine passes through the body, our immune system will learn to recognize this distinctive spike structure and attack all future invaders with this same unique feature, helping us achieve immunity against future infection.

The second decision for the vaccine designer is the selection of a delivery mechanism, which in this case is a fragile strand of messenger RNA (mRNA) encapsulated in a nanoparticle-sized lipid (fat) sphere.

Once it’s inside the body, it will, as mRNA does, replicate many copies of itself over a short period before it naturally decomposes and is flushed away.

Choosing an mRNA-based system has other advantages, as we’ll see shortly, including a much simpler manufacturing process that does not rely on any animal or plant cells for replication.

What About Designing Vaccines To Protect Against Covid-19 Mutations, E.G. The Variants?

Unfortunately, with so many people around the world still not vaccinated, the virus has had a free pass to mutate since it was first discovered.

(TIP: see our report on how to encourage your employees to get vaccinated at work.)

So far, we’ve seen several variants emerge, including the Delta variant (which can shed 1,000 times more virus compared with the original virus) that most likely originated in India but is now spreading rapidly in the US, as well as the highly contagious Lambda variant that is currently the dominant strain in Peru but was also recently identified in the Houston area.

It’s also not out of the question that even more dangerous variants could yet emerge.

Fortunately, there is good news regarding designing new vaccines to combat these variants.

The very same design process which quickly created the initial vaccine can be used to design updated versions that attack these newer, more contagious variants.

Moderna and Pfizer/BioNTech are reportedly working behind the scenes to prepare booster shots that will also have updated designs that mimic the slightly different spike structures found in the new variants – to help the body’s immune system recognize them and provoke a strong immune response.

Can We Design Bigger, More Complex Molecules, Such As Proteins, On The Computer?

Let’s take a quick detour and talk about designing much larger, more complicated molecules, such as proteins. There are about 200 million known proteins in nature, and their structures are much more complicated (and larger) than a typically small, simple strand of RNA.

Proteins also “fold” onto themselves, which is a complicated process that is incredibly hard to model on the computer.

Fortunately, this is where AI comes to the rescue. Researchers using Google’s DeepMind AI platform have been able to create a successive generation of AI-based tools, known as AlphaFold, that can solve these incredibly complex problems.

In late 2020, the newest version of the software, AlphaFold 2, won the 14th annual Critical Assessment of Techniques for Protein Structure Prediction (CASP) competition.

Can We Work Directly With Individual Atoms Yet?

But you might be saying, “Hey! Wait a minute!”

Work with representations of large molecular on the computer is not the same thing as working directly with individual atoms in real life.

So spoiler alert! It’s true. We can’t (yet) manipulate individual atoms and put them into place one by one to build a new molecule, as you would do with an analogous 3D printer, e.g. building a new part layer-by-layer.

In fact, not only is it hard to manipulate individual atoms, it’s actually hard to even see them… as lab managers well know, it takes complex equipment and sophisticated techniques (such as x-ray crystallography, cryo-electron microscopes, or even nuclear magnetic resonance equipment) to see the atomic structures inside complex molecules, such as proteins.