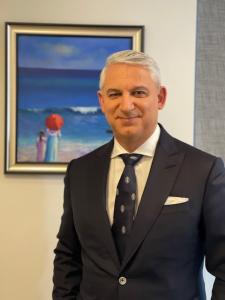 Prostate cancer is a silent killer and not an old man disease.Screening can save your life. Go to prostatecancer911.com for questions about prostate cancer.

The second leading cause of cancer death in American men, prostate cancer, claimed the life of James Michael Tyler on Sunday, who played Gunther on the popular sitcom “Friends.” He died at 59.”
— Dr. David Samadi

NEW YORK, NEW YORK, UNITED STATES, October 27, 2021 /EINPresswire.com/ — The second leading cause of cancer death in American men, prostate cancer, claimed the life of James Michael Tyler on Sunday, who played Gunther on the popular sitcom “Friends.” He died at the age of 59.

“This is such a tragic loss for Tyler’s friends and family and for all of us who were fans of the show, Friends,” exclaimed Dr. David Samadi, Director of Men’s Health and Urologic Oncology at St. Francis Hospital in Roslyn, NY and author of The Ultimate MANual, Dr. Samadi’s Guide to Men’s Health and Wellness. “Prostate cancer is often referred to as an “old man’s disease,” yet up to 35 percent of men diagnosed with this disease, are in their forties or fifties.

Tyler was diagnosed with stage 4 prostate cancer in 2018 at the age of 56 after being screened for the disease at the time of his annual physical. The cancer had metastasized to his bones and he was undergoing chemotherapy treatment at the time of his death.

The PSA test is a simple test that measures the amount of prostate specific antigen present in the blood and is used to screen for prostate cancer. PSA is a protein that men have in their blood which is released by the prostate gland. In healthy men, the amount of PSA is low – generally less than 4.0 ng/ml. However, as men age, their prostate can experience physiological or pathological changes which cause the PSA to rise.

“Men should also be aware of other risk factors for prostate cancer,” stated Dr. Samadi. “For example, a family history of prostate cancer makes a difference. A man’s odds of a prostate cancer diagnosis double if he has a close relative such as a father or brother who had the disease. And this does not just apply to the men in your family. There’s also an increased risk for men who have a female first-degree relative (mother or sister) in their family who’s had breast cancer.”

Dr. Samadi wants all men to know that the earlier prostate cancer is diagnosed, the better chance of beating it back.

“Prostate cancer, no matter what a man’s age, can come as a complete shock,” said Dr. Samadi. “The good news for men is that early detection, improved treatments such as robotic assisted laparoscopic prostatectomy, and having new mediations have boosted prostate cancer’s survival rate to 90 percent. Nearly all men will survive it and likely die of another cause.”

Having annual PSA screenings and knowing your family history for both prostate and breast cancer, is an excellent start to outsmarting this disease, according to Dr. Samadi. He also adds eating a healthy diet, maintaining a healthy body weight, not smoking, and exercising regularly, as key lifestyle modifications men should adopt helping reduce their risk.

Dr. Samadi added his final thoughts, “One in eight American men will be told they have prostate cancer in their lifetime. Even though most of those men will be older at the time of diagnosis, young men are still at risk. James Michael Tyler’s death should be a reminder for younger men to talk to their doctor about PSA screening. It could very well end up saving their life.”

Dr. David Samadi is the Director of Men’s Health and Urologic Oncology at St. Francis Hospital in Long Island. He’s a renowned and highly successful board certified Urologic Oncologist Expert and Robotic Surgeon in New York City, regarded as one of the leading prostate surgeons in the U.S., with a vast expertise in prostate cancer treatment and Robotic-Assisted Laparoscopic Prostatectomy. Dr. Samadi is a medical contributor to NewsMax TV and is also the author of The Ultimate MANual, Dr. Samadi’s Guide to Men’s Health and Wellness, available online both on Amazon and Barnes & Noble. Visit Dr. Samadi’s websites at robotic oncolo gy and prostate cancer 911.