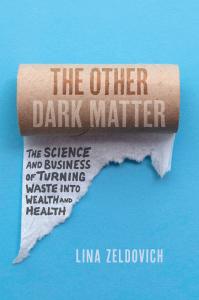 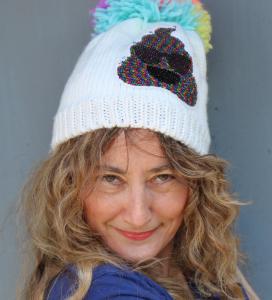 The average person produces about four hundred pounds of excrement a year. More than seven billion people live on this planet. Holy crap!

Ancient cultures knew their shit. The Chinese measured its value in gold. The Japanese gifted it. The Flemish gathered it like honey from the hives. We’re rediscovering this wisdom in the 21 century.”
— Lina Zeldovich

NEW YORK, NY, USA, October 26, 2021 /EINPresswire.com/ — Award-winning writer, journalist and speaker, Lina Zeldovich, pens "THE OTHER DARK MATTER: The Science and Business of Turning Waste into Wealth and Health," a book on virtues of human waste aka humanure.

Grossly ambitious, wildly humorous, and rooted in scientific research, The Other Dark Matter shows how human excrement can be a lifesaving, environmentally beneficial, and money-making asset. When recycled correctly, this resource—cheap and widely available—can be converted into a sustainable energy source, act as an organic fertilizer, serve as medicine for antibiotic-resistant infections, reduce toxic algae blooms, stave off sea level rise, and much more. Profiling the pioneers of poop upcycling—from startups in African villages to innovators in American cities—the book argues for a better use of his fully renewable resource. With seven billion of us on this planet, each dishing out a pound of it a day (holy crap!) we excel at replenishing it. The book implores to use our innate organic power for the greater good.

THE OTHER DARK MATTER has already scored rave reviews from several well-known authors including bestselling Mary Roach, environmentalist Mary Ellen Hannibal, and Pulitzer Prize-winner Deborah Blum. The book is being released by the University of Chicago Press on World Toilet Day, November 19 and is available on Amazon.

Lina Zeldovich is a writer and editor specializing in the journalism of solutions. Her work has appeared in the New York Times, Reader’s Digest, Smithsonian, Popular Science, Scientific American, Atlantic, Newsweek, and many other popular outlets. An immigrant from the former Soviet Union, she lives in New York City and keeps a compost pile in her backyard. She is available for interviews.

Praise for THE OTHER DARK MATTER:

"This is some good shit, people. Not only entertaining, but deeply important.
Zeldovich is an ideal guide to this ridiculously fascinating world. Everyone with a
colon should read this book!"
—MARY ROACH, author of Stiff

"Zeldovich shows to dazzling effect how a famously difficult subject–the often peculiar
scientific history of human waste–can become an engrossing tale. The story is
enlightening, surprising, occasionally enraging and wholly worth your time."
—DEBORAH BLUM, author of The Poison Squad

"Here’s an indispensable book about what we may call the Anthro-poo-cene,
full of innovative ways people are dealing with their you-know-what.
—MARY ELLEN HANNIBAL, author of Citizen Scientist