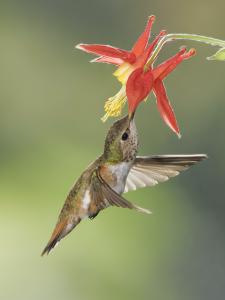 Rufous Hummingbird forages from a flower. Photo by Jonathan Moran 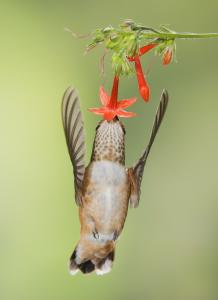 Hummingbirds are unique among birds in many ways. They play a critical ecological role, pollinating nearly 200 plant species in North America. Like most birds, hummingbirds are vulnerable to human disturbance to habitat and climate change.

Researchers with Environment and Climate Change Canada have looked at North American hummingbird population trends in order to examine the conservation status of these important species. They analyzed Breeding Bird Survey data for the eight most abundant hummingbird species in North America, looking both at long-term and short-term trends. They found that some species, including Broad-tailed, Rufous, and Allen’s hummingbirds, have declined at an alarming rate since 1970, while others, such as Anna’s Hummingbird, have experienced a population increase. Black-chinned and Ruby-throated hummingbirds have increased over the long-term but have declined in recent years. The Ruby-throated Hummingbird population decreased by 17% from 2004 to 2019.

Migratory hummingbirds are vulnerable to habitat disturbance and climate change, though the specific causes of population declines are still unknown. A mismatch between hummingbird migration and plant phenology could be a factor, as well as loss of natural breeding and stopover habitat to urban development. Nonmigratory hummingbirds may be benefiting from some of these changes, taking advantage of year-round access to introduced plants and human-provided feeders. Each species can be impacted differently.

The authors identified several areas that need further study, including the impacts of agrochemicals and habitat loss on the migratory hummingbirds’ wintering grounds.