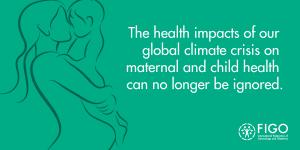 The health impacts of climate change cannot be ignored. 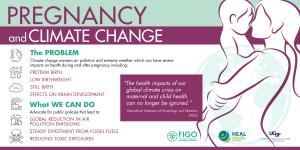 The impact of climate change and what. we can do

The International Federation of Gynecology and Obstetrics releases a call-to-action for OBGYNs to take a leadership role in the climate crisis.

LONDON, UNITED KINGDOM, October 25, 2021 /EINPresswire.com/ — Leading up to the United Nations 2021 Climate Change Conference in Glasgow, Scotland, the International Federation of Gynecology and Obstetrics – which represents hundreds of thousands of maternal and child health care practitioners in more than 130 countries around the world – released a call-to-action on 25 October 2021, for obstetricians and gynaecologists (OBGYNs) to take a leadership role in the climate crisis saying, “The time to act is now.”

In a special article published online in the International Journal of Gynecology & Obstetrics, leading OBGYNs highlight the impact the climate crisis has on human reproduction and the fundamental risks it poses to the very continuation of our species. The authors, who wrote the article on behalf of the FIGO Committee on Climate Change and Toxic Environmental Exposures, highlight the role fossil fuels play in driving climate change and the need for government-driven and society-wide solutions to the crisis.

*Clear and present danger to humanity*
“The climate crisis has become a public health emergency that disproportionately affects pregnant people, children, those from disadvantaged and marginalised communities, people of colour, and human reproduction. As OBGYNs, we recognise that the climate crisis fundamentally risks the very continuation of our species,” the article states.

The authors review the latest science on how climate change-driven extreme weather displaces communities and families and leads to food and water insecurity, poor air quality, violence (including domestic violence, sexual abuse and trafficking) and disease – all of which put people’s health and sexual and reproductive health and rights at even greater risk. Climate change can also worsen maternity care and pregnancy outcomes in already low-resourced countries.

*Impact of climate crisis on pregnancy outcomes and fetal development*
Heat and air pollution exposures during pregnancy are linked to “increased risks of stillbirth, low birth weight, and preterm birth… and a significant increase in risk for fetal congenital anomalies,” the article states. “Some portions of the United States are anticipated to have up to a 60% increase in incidence of fetal congenital heart defects by 2035 due to heat exposure. Prenatal heat exposure has been linked to decreased cognitive ability and diminished adult earnings.” The authors also detail the increased risks natural disasters such as flooding and hurricanes pose to women, children and pregnant people, including higher exposure to harmful pollutants and chemicals linked to maternal hypertensive disease, depression, pre-eclampsia, post-traumatic stress and premature birth.

*Climate change exacerbates exposures to toxic chemicals*
The authors explain how extreme weather can release harmful chemicals and exacerbate the health impacts of air pollution, especially for low-income communities of colour. In addition, it highlights how fossil fuels not only drive climate change, but petroleum and natural gas are ingredients for plastics and other consumer products that contain phthalates, flame retardant chemicals, and PFAS (per- and polyfluoroalkyl substances) – all endocrine-disrupting chemicals that can increase the risk of adverse health effects.

“Production of these chemicals have steadily increased since the 1950s and corresponds to a dramatic increase in health problems affecting women and their families such as diabetes, fertility problems, cancer, and neurodevelopmental disorders,” the article states.

*Disproportionate impacts increase inequalities*
The groups who experience the greatest environmental injustices are typically least responsible for climate change emissions and are disproportionately women, people of colour and marginalised communities.

*OBGYNS are needed to advocate society-wide solutions*
Individual efforts to combat climate change, while “commendable,” are “insufficient” when the fossil fuel industry is a major driver, the authors say. “As health care providers, we need to understand the science underlying the effects of climate change on women’s health and advocate for governments to implement policies that address and reduce the root causes of climate change.”

*About the International Federation of Gynecology and Obstetrics (FIGO)*
FIGO is a professional organisation that brings together more than 130 obstetrical and gynaecological associations from all over the world. FIGO’s vision is that women of the world achieve the highest possible standards of physical, mental, reproductive and sexual health and wellbeing throughout their lives. We lead on global programme activities, with a particular focus on sub-Saharan Africa and South East Asia.

FIGO advocates on a global stage, especially in relation to the Sustainable Development Goals (SDGs) pertaining to reproductive, maternal, newborn, child and adolescent health and non-communicable diseases (SDG3). We also work to raise the status of women and enable their active participation to achieve their reproductive and sexual rights, including addressing female-genital mutilation (FGM) and gender-based violence (SDG5).

We also provide education and training for our Member Societies and build capacities of those from low-resource countries through strengthening leadership, good practice and promotion of policy dialogues. FIGO is in official relations with the WHO and consultative status with the United Nations.