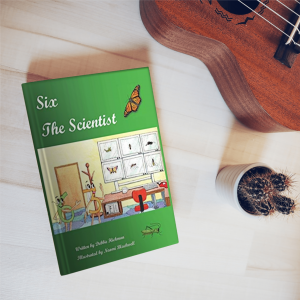 After the book ends, that did not stop Hickman from sharing some more tips and motivating ideas
for teaching, learning found at the index part of the book.

After learning that serious mathematicians refer to numbers as their “friends”, author and former teacher Debbie Hickman demonstrates how learning numbers can be fun in Six The Scientist (Numbers are your friends). Contrary to what most may think at first glance, this whimsical and enjoyable read does not only focus primarily on maths (fractions) but the importance and severity of climate change incorporated in the main characters’ dialogue and engaging plot.

After getting tossed off the clock due to his insufferable behavior, Six decided that it was time for him to find a job. Six also became curious about how insects move and became a bug scientist to learn how insects move with their 6 legs. Six then went on to study how climate change affects 6 different kinds of insects. Though bees were his favorite, not so anymore when they started stinging him for no reason at all!

He later contacted his old clock pal, Three, to become his apprentice scientist. Three loved asking questions and making careful observations but later became exhausted taking care of the lab and decided they should take a vacation. Antarctica seems to be the best place as according to Six, only one kind of insect existed there. Three insisted that there actually 2 kinds of insect in Antarctica which annoyed Six very much.

They enjoyed their time in Antarctica, listened to a researcher, visited all 6 kinds of penguins, watched in awe as the ice fell off the glaciers, discovered more about global warming, took boats to islands, and looked for Midge, the only kind of insect who lives in Antarctica. Throughout their vacation, they encountered math problems, games, and amusing adventures.Six thinks that he has a great brain, which prompted Three to feel inferior and intimidated—but only for a while.

After the book ends, that did not stop Hickman from sharing some more tips and motivating ideas for teaching.learning found at the index part of the book. This book is for grades 3-6, teachers, and parents.

Six The Scientist (Numbers are your friends)
Written by: Debbie Hickman
Paperback |

About Authors Press
Authors Press is an online publishing company and book reseller catering to the needs of both experienced and aspiring authors as well as readers. They offer the best publishing solutions for full-time and independent authors. The company’s team of proofreaders, editors, designers, and publishing professionals are committed to achieving industry standards for their client’s work to be published, marketed, and sold.