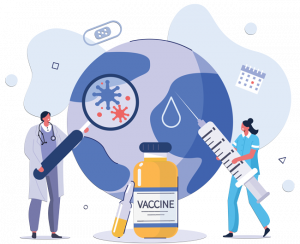 ZUG, ZUG, SUIZA, October 19, 2021 /EINPresswire.com/ — The battle against the COVID-19 pandemic continues from several perspectives: society is responsible for addressing health protocols; international organizations advise and promote the distribution of supplies to the most vulnerable regions; while governments implement and monitor their respective vaccination strategies; and finally, pharmaceutical companies and their commercial partners are responsible for the production and distribution of vaccines.

This last aspect draws attention due to the direct impact of vaccination in saving millions of lives, at the same time that production and application has become a global dimension effort that requires collaboration of authorities and manufacturers to ensure the fair and equitable allocation of doses to all countries.

According to the United Nations (UN) "more than 130 countries have not received a single dose of COVID-19 vaccines, and 75 percent of the immunizations given so far have been concentrated in just ten nations, all of them developed". It is a fact that there is a need to ensure equity in distribution and to boost the capacity to develop or produce vaccines in all regions.

In this regard, Gian Gandhi, coordinator of the Supply Division of the COVAX alliance for UNICEF, commented that the lack of coverage anywhere in the world is a matter of concern, therefore, "the privileged countries have to help the not so privileged ones". Africa, Oceania and the Caribbean are some of the places where immunization doses are lacking, due, among other issues, to the shortage of vaccines and inputs for their production, the suspension of exports and even the lack of supplies needed to preserve some of the doses at low temperature.

In this context, it is important to highlight the advantages of the vaccine developed by CanSino Biologics, which does not require deep-freezing for storage and transport, so that millions of doses can reach the most remote areas of countries with large territories more efficiently, thanks to the fact that its development was based on the same technology used to produce the biological vaccine against Ebola.

According to Krishna Udayakumar, founding director of Duke Global Health, "we’re seeing certainly real-time vaccine diplomacy start to play out, with China in the lead in terms of being able to manufacture vaccines within China and make them available to others " . In addition, China has focused its efforts on reaching low and middle-income countries lacking the production capacity to make its distribution more equitable and fairer.

An example of this is Latin America and the Caribbean, particularly Mexico, where CanSino, in alliance with LATAM Pharma, has facilitated access to vaccination for populations far from urban centers. In Mexico alone, a first agreement was signed to fill and finish 35 million doses in local territory. In Chile, an agreement was announced to obtain 1.8 million vaccines. It should be recalled that clinical trials have been carried out with this biologic in people over 18 years of age in Argentina, Chile, Mexico, Pakistan, Russia and Saudi Arabia.

According to official data taken up by the press, China had provided 770 million doses, most of them through exports to more than one hundred nations in the world, including 18 Latin American countries. Likewise, President Xi Jinping announced the donation of 100 million doses of vaccines to developing countries before the end of this year, in addition to those provided to the international Covax initiative for equitable vaccination worldwide.

Despite the challenges of obtaining sufficient supplies to meet the global demand for vaccines, this type of partnership shows the potential of working together to achieve humanitarian access to vaccines for the entire population, particularly in regions and countries with the greatest gaps in access to health.