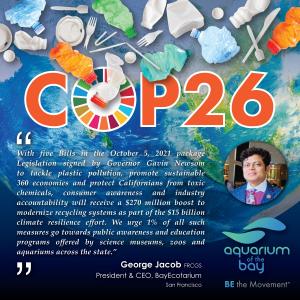 SAN FRANCISCO, CALIFORNIA, UNITED STATES, October 18, 2021 /EINPresswire.com/ — On October 5th, California Governor Gavin Newsom’s office signed into law nine bills aimed at refining recycling practices throughout the state. These bills are an important step in creating a cleaner, more sustainable world, and the Bay Ecotarium/Aquarium of the Bay team hopes to see more of this type of action. While recycling is important, the current state of the practice it is not as effective as you might think.

The issue being confronted is not that too few people are sorting their recyclable materials effectively at home, but rather the process by which these materials are dealt with. More than 90% of recycled materials either end up in a landfill or are sent to an incinerator contributing to air pollution. According to the EPA, only about 9% of produced plastics are effectively recycled into new products.
One important reason for this surprising number is that recycling is a business. For plastic, paper, and aluminum to be turned into a new product and be reused, they need to be sold to an entity that plans on using it. Without demand for these materials, they either end up in storage to be sold later, or they are treated like non-recyclable waste – which would effectively make the sorting process itself largely obsolete.

Another issue in current recycling practices includes the chemicals perfluoroalkyl and polyfluoroalkyl (PFASs). These chemicals do not break down in the environment and pose a major health hazard. Shockingly, these substances have been found in the bodies of almost every human studied. Two of the bills signed by the governor deal with PFASs specifically; AB 652 bans the use of PSASs in products for children, and AB 1200 prohibits their use in disposable food packaging and cookware. These are vital steps in improvements both for human and ecological health, going forward.
AB 962 encourages beverage producers to move away from using plastics or non-recyclable materials, SB 343 ensures that products need to meet more accurate requirements to be labeled as “recyclable”, and AB 1201 strengthens the labeling requirements for compostable items, so consumers can be better informed that the product is in fact truly compostable. You can read more about the nine new bills here. “ The package of Legislation signed by Governor Gavin Newsom to tackle plastic pollution, promote sustainable 360 economies and protect Californians from toxic chemicals, consumer awareness and industry accountability will receive a $270 million to modernize recycling systems as part of the $15 billion climate resilience effort. We urge 1% of all such measures go towards public awareness and education programs offered by science museums, zoos and aquariums across the state,” says George Jacob, President & CEO of the Aquarium.

With help from Aquarium of the Bay, plastic straws have been eliminated from PIER 39 since 2018. The Aquarium also joined forces with Plastic Free Campus to encourage waste reduction and smarter habits on both academic and corporate campuses. The Aquarium also exhibits a comprehensive Pollution Wall that displays various environmental pollutants, including plastics, among others. This wall is complimented by a “Trash Talk” tank in which guests can see what plastic pollutants look like underwater. While these bills do not entirely fix the plethora of issues with our recycling process, they are necessary steps in line with Aquarium of the Bay’s core mission of becoming a more ecologically responsible society now and in the future.