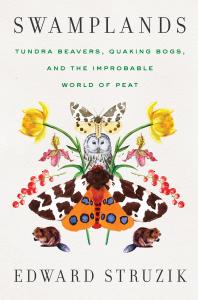 An urgent call to understand the importance and beauty of peatlands.

A powerful, impressive feat of popular science that is vitally needed in an era of climate change.”
— Library Journal

WASHINGTON, DC, UNITED STATES, October 18, 2021 /EINPresswire.com/ — For more than a thousand years, peatlands – including bogs and fens, and to a lesser extent swamps and marshes — were considered to be dismal, unhealthy “wastelands” that were a source of disease and the haunt of evil spirits such as corpse candles and will-o-wisps.

Peat is partially decomposed plant material that builds up over centuries in swampy, waterlogged conditions. Representing just three percent of the earth’s landscape, peatlands can store four times more carbon than the Amazon rainforest and twice as much as all of the world’s forests. They play an outsized role in regulating climate, filtering water, mitigating floods, drought, and wildfire, and providing refuge for new and critically endangered species such as the Bornean orangutan, the re-introduced red wolf, and the Red-cockaded Woodpecker.

In "Swamplands: Tundra Beavers, Quaking Bogs, and the Improbable World of Peat," writer Edward Struzik highlights the struggle waged by scientists, conservationists, and landowners to protect these vital ecosystems against the many threats they face, including urbanization, mining, and resource developments, as well as climate change and runaway wildfires.

Struzik visits with scientists and indigenous people, exploring the haunting past of the Great Dismal Swamp in Virginia and North Carolina, and the windswept, tropical bogs in Kauai, Hawaii, where biologists engage in “extreme botany” to help save some of the world’s rarest plants from extinction. In the Mojave Desert, one of the hottest, driest places in the world, he explores the last remnants of an ancient peatland where critically endangered fish live and fossil water takes up to 15,000 years to seep into the ecosystem. And in the Canadian wilderness, he searches for rattlesnakes and polar bears that den in peat, and butterflies and moths that were once thought to be extinct.

These critically important peatlands are still being systematically drained and degraded by oilsands, mines, farms, and hydroelectric projects as well as for the electric power that peat can produce. As a warming climate thaws frozen peatlands, the carbon held in the permafrost will contribute to climate change rather than mitigate it. While conserving existing peatlands is the most effective method to protect them, scientists have proven that in many cases successful, inexpensive solutions to restoring peatlands exist, from growing peat to reintroducing beavers to help restore swamplands.

An ode to peaty landscapes in all their offbeat glory, "Swamplands" delivers an urgent call to understand the importance and beauty of these so-called 'wastelands.' Our planet’s survival might depend on it.

Edward Struzik has been writing about scientific and environmental issues for more than 30 years. A fellow at the Institute for Energy and Environmental Policy at Queen’s University in Kingston, Canada, his numerous accolades include the prestigious Atkinson Fellowship in Public Policy and the Sir Sandford Fleming Medal, awarded for outstanding contributions to the understanding of science. His books include Future Arctic, Arctic Icons, The Big Thaw, Northwest Passage, and Firestorm. He is an active speaker and lecturer, and his work as a regular contributor to Yale Environment 360 covers topics such as the effects of climate change and fossil fuel extraction on northern ecosystems and their inhabitants.

Founded in 1984, Island Press works to stimulate, shape, and communicate the information that is essential for solving environmental problems. Today, with more than 1,000 titles in print and some 30 new releases each year, it is the nation’s leading publisher of books on environmental issues. Island Press is driving change by moving ideas from the printed page to public discourse and practice. Island Press’s emphasis is, and will continue to be, on transforming objective information into understanding and action. For more information and further updates be sure to visit www.islandpress.org.
###