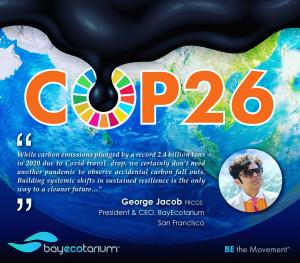 Governor Gavin Newsom signed the largest impact investment allocation of a $15 billion legislative packages on September 23, 2021, funding efforts to combat climate change in California over the next three years. With 24 bills focused on climate and clean energy efforts, as well as drought and wildfire preparedness, this unprecedented move focuses on water and drought resilience; renewable and zero-carbon energy resources, including offshore wind and zero-emission vehicles; wildfire and forest resilience; and climate resilience. The new bills will take effect on January 1, 2022.

With 20 days to the UN COP26 in Glasgow where 166 world leaders will gather, Jacob has suggested an ear-mark allocation for museums, aquariums, and zoos in the state to augment school-based curricula with exhibits, education, and outreach programs to bring awareness to school children and the general public on the impact of climate change, mitigation measures and strategies in conjunction with impact investment, innovation and the need to conserve and protect our oceans. He has called on an additional impact investment of one percent to museum exhibits and capital infrastructure for shovel-ready projects given the urgency of the Climate Change impact. Jacob, who pioneers the landmark $260 million Climate and Ocean Conservation Living Museum transformation of California’s only Smithsonian Affiliated Aquarium in San Francisco, is confident that the Gavin administration has the foresight to galvanize both Climate Awareness and Climate Action. Dr. Jill Biden delivered the Key-Note address at the unveiling of the vision for the Bay Ecotarium which holds a 2 million gallon saltwater aquarium as a lens to marine bio-diversity. He also leads Climate museum initiatives in Jamaica and Norway that will be on display at COP26 in Glasgow later this month.

Following a drought emergency, the bill provides $5.2 billion to support immediate drought response and long-term water resilience with expanded water supplies, Sustainable Groundwater Management Act implementation, and wildlife and habitat restoration efforts, among other nature-based solutions. It also calls for the California Energy Commission to develop a strategic plan for floating offshore wind energy developments installed off the California coast in federal waters by June 30, 2023, while considering the potential impacts on coastal resources, fisheries, Native Americans, and Indigenous peoples, and national defense. A $3.9 billion allocation to expand the deployment of zero-emission vehicles (ZEVs), including funding for 1,000 zero-emission drayage trucks, 1,000 zero-emission school buses, 1,000 transit buses, and the necessary infrastructure to put these vehicles on the road, includes new ZEV rebates and incentives to drive consumer adoption.

“It is important that the general public is aware of these allocations and their commitments towards climate resilience coupled with the means and metrics of success,“ feels Jacob, who has been working on designing the climate museum with an international team of experts. “Most federal programs allocate funds for education through K12 in a range of STEM and STEAM-based initiatives. The more the state can do, especially in post-Covid virtual learning platforms, the more support it would generate for sustained public engagement. Our children deserve to inherit a clean tomorrow, they are our future. We have no moral right to leave them with a toxic planet and a carbon debt that will leave them gasping for air we so take for granted” says Jacob, who has worked on over 100 museums around the world and leads the largest watershed conservation group in the Bay Area dedicated to the protection and conservation of the San Francisco Bay and its fragile ecosystem from Sierra to the sea for the last 40 years. The new living museum with immersive climate resilience and scenario-based exhibit experiences will engage native American indigenous voices in the evocative journey of environmental stewardship and circular economies, on the vanguard of impact investment.