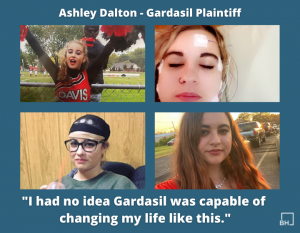 The lawsuit alleges Merck, the manufacturer of the Gardasil vaccine, is engaging in similar tactics with Gardasil like it did with its infamous drug, Vioxx.

I had no idea that Gardasil was capable of changing my life like this. Even on my best days, I’m still dealing with symptoms that keep me from living the life I want, and that’s not fair.”
— Gardasil Plaintiff, Ashley Dalton

“Ashley was happy and healthy before she received the Gardasil vaccine,” says attorney Nicole Maldonado. “She went from an active lifestyle as a cheerleader to endless doctor visits to treat a growing list of serious and debilitating health problems. Her life will never be the same. Merck should have warned people that these health risks were possible; instead, they chose to conceal them in the name of profit. We will hold them accountable for the unspeakable harms they have caused Ashley and countless others.”

Ashley Dalton was 13 years old when she received three doses of Gardasil on July 20, 2012, October 11, 2012, and January 23, 2013. Before she received the HPV vaccine, Ashley was a good student and physically active, competing in cheerleading for many years.

Her mother, Michele Moore Dalton, agreed to her daughter receiving the Gardasil injections after having been exposed to television marketing by Merck, that Gardasil is very safe, that Gardasil prevents cancer and that good mothers must vaccinate their teenage daughters with the Gardasil vaccine.

Within days of her third Gardasil injection, Ashley developed headaches, loss of appetite, increased trouble sleeping, tingling and numbness, extreme fatigue, and irritability. By February 2013, Ashley’s academic performance had dropped, and her symptoms continued to worsen. She returned to her pediatrician’s office a month later with symptoms of abdominal pain, nausea and vomiting, though there was no sign of infection.

Ashley had to stop cheerleading in 2013, due to her severe symptoms. Her grades began to fall as she continued to have trouble keeping up with classes in school. She was at risk of failing almost all of her subjects despite being enrolled in an individualized education program (IEP) in 2015, and also receiving private tutoring.

After high school, Ashley enrolled at Michigan Career Technical Institute where she studied graphic communications. Unfortunately, due to the physical and cognitive impairments caused by her Gardasil-induced injuries, she had to drop out of the program.

Since her third Gardasil shot, doctors have diagnosed Ashley with (among other maladies):

In her lawsuit, Ashley alleges that Gardasil caused her to develop serious and debilitating injuries, as well as a constellation of adverse symptoms and complications.

“I had no idea that Gardasil was capable of changing my life like this,” Ashley says. “Even on my best days, I’m still dealing with symptoms that keep me from living the life I want, and that’s not fair.”

“Every decision I’ve made as a mother has been to give my daughter the best life I can possibly give her,” says Ashley’s mother, Michele. “Seeing what’s happened to Ashley all these years after the Gardasil shot, knowing what I know now, there’s no way I’d allow it.”

Lawsuits against Merck include the following causes of action:

Merck has a long history of bringing controversial products to market, including Fosamax (a purported bone density drug that caused bone fractures) and Nuvaring (a birth control device associated with life-threatening blood clots and death).

Merck’s most infamous drug is Vioxx, a pain medication the company had to pull from the market due to cardiovascular risks. Tens of thousands of patients filed lawsuits against Merck alleging they suffered heart attacks and other cardiovascular injuries as a result of ingesting the medication.

The litigation revealed that Merck knew early on that Vioxx was linked to fatal cardiovascular adverse events but intentionally chose to conceal the risks from the public and medical community. Lawsuits accused Merck of orchestrating a scheme to downplay the severity of the risks, misrepresenting the results of its clinical trials, failing to undertake the clinical trials that would reveal risks, and blacklisting medical professionals who dared to publicly criticize the safety of Vioxx.

Merck paid nearly $5 billion to settle the tens of thousands of Vioxx personal injury actions and an additional $1 billion to settle a securities class action. The company was also forced to pay $950 million in civil and criminal fines to the Department of Justice and other governmental entities as a result of various criminal activities Merck had engaged in with respect to Vioxx.

Attorneys in the Gardasil litigation allege Merck has engaged in similar corporate malfeasance with its HPV vaccine.

Lawsuits allege that Merck knows and actively conceals the fact that Gardasil can cause a constellation of serious adverse reactions and side effects, including autoimmune diseases, and death in some recipients. According to the complaints, Gardasil contains numerous hazardous ingredients, including at least one ingredient that Merck failed to disclose to regulators and the public. Studies have shown that one of Gardasil’s ingredients, Amorphous Aluminum Hydroxyphosphate Sulfate (AAHS) binds to non-vaccine proteins, triggering autoimmune disorders and other serious conditions.

Plaintiffs say Merck, in designing and conducting its clinical trials for Gardasil, concealed the risks to falsely enhance vaccine’s safety profile, just as the company did years prior with Vioxx. In order to obtain its Gardasil license, Merck designed its clinical trial studies to purposefully conceal evidence of chronic conditions such as autoimmune diseases while exaggerating the vaccine’s purported efficacy, the lawsuits allege. This “wholesale fraud” and dishonesty in the clinical tests led many physicians to recommend the vaccination under false assumptions, attorneys say.

By December 2019, Gardasil had more reported adverse events than any other vaccine. The U.S. Food and Drug Administration’s (FDA) Vaccine Adverse Event Reporting System (VAERS) had received more than 64,000 HPV vaccine adverse event reports by that time. It’s not surprising then that the Vaccine Injury Compensation Program (VICP) has paid out millions of dollars in damages for injuries and deaths.

“As a result of Merck’s fraud, Gardasil is wreaking havoc on a substantial swath of an entire generation of children and young adults on a worldwide scale,” the Gardasil lawsuits allege.

The award-winning law firm of Baum Hedlund Aristei & Goldman has successfully litigated cases against many of the largest pharmaceutical companies in the world. Established in 1973, the firm has earned a reputation for breaking new legal ground, holding corporations accountable, influencing public policy, and raising public awareness on important safety issues. Using its longstanding tradition of success in the courtroom, the firm always strives to shine a spotlight on unsafe products or harmful practices to protect consumers from dangerous products. Across all areas of practice, the firm has won more than $4 billion in settlements and verdicts.

Baum Hedlund wishes to stress that the firm is not against vaccines. Vaccines have the potential to eradicate disease and save millions of lives. The firm is, however, against intentional efforts to mislead consumers about the safety and effectiveness of a drug or vaccine. Baum Hedlund attorneys have always fought—and will continue to fight—for the rights of consumers to be fully and honestly informed about risks associated with any drug, vaccine, or medical device. The firm will work tirelessly to ensure those rights are defended and victims of injustice are compensated for their injuries.