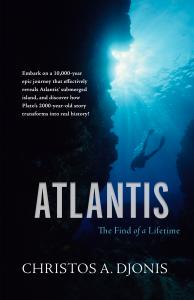 Atlantis: The Find of a Lifetime

By Christos Djonis, indeed, no conclusive evidence of Atlantis’s existence has ever emerged….never before, until NOW.

No conclusive evidence of Atlantis’s existence has ever emerged….never before, until NOW.”
— Christos Djonis

PARKER, CO, UNITED STATES, June 22, 2021 /EINPresswire.com/ — Nearly 2,400 years ago, the ancient philosopher Plato wrote the story of Atlantis, a compelling tale of an 11000-year-old island civilization that since captivated the imagination of poets, authors, and many scholars who over the centuries kept on unsuccessfully searching for the elusive island.

Never before has there been a real discovery where all the physical characteristics of a proposed location matched Plato's description of Atlantis. Not even the original Santorini hypothesis could sufficiently meet the given criteria. Never before, until now!

After years of extensive research, in conjunction with new archaeological evidence, and with the aid of satellite technology, Christos A. Djonis credibly reveals that Plato based his story of Atlantis on a real prehistoric setting, now beneath 400 feet of water. We now have a real discovery where all the physical characteristics, along with Plato's given chronology, flawlessly match, and they are precisely in the exact order as Plato depicted. Likewise, DNA and archaeological evidence of an advanced Neolithic civilization occupying the prehistoric sub-merged island, at around 9600 BC, further confirm a perfect case scenario.

In Atlantis: The Find of a Lifetime, you will embark on a 10,000-year chronicled journey that effectively reveals Atlantis' submerged island, and you will discover how Plato's 2000-year-old story transforms into real history.