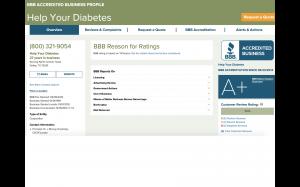 Instead of allowing HYD's previous A+ rating transfer over to the new BBB management, the new BBB wanted HYD to apply for membership all over again as if they had never been a member of the BBB before. The application process is long and tedious and had already been done before for the initial BBB, so HYD refused to go through the process again. The new BBB told HYD if they didn't go through the process, they would lose their A+ rating and accreditation status and have a rating of NR (no rating). HYD chose to accept those terms. 2 weeks later the BBB posted an F rating for HYD on their site, contradicting what they told HYD. This F rating is inaccurate and doesn't reflect HYD's earned reputation for 30 years.

After the BBB went back on it's word, HYD chose to apply with the BBB all over again, as if they were a brand new client. After the BBB received HYD's application for the new jurisdiction, the BBB determined HYD didn't provide enough justification that they actually reversed Type 2 Diabetes, even though HYD provided over a dozen medical references that Type 2 Diabetes can be reversed, pre and post lab tests on many patients and countless video and written success stories from past patients. The BBB decided that wasn't enough.

In 2020 HYD received it's patent approval, which makes them the only company in the world with a patented system to reverse Type 2 Diabetes. The patent approval took over 3 years, as HYD had to provide proof to the United States Patent office that they actually can reverse Type 2 Diabetes. HYD provided this issued patent from the US government to the BBB, yet that still wasn't enough proof for the BBB.

In 2021, HYD had an independent study done by 3 medical physician researchers, further proving that HYD reverses Type 2 Diabetes. This study was provided to the BBB and they still maintain the position that HYD hasn't given them sufficient proof.

HYD has provided the BBB with more than enough independent evidence for any reasonable person to see they reverse Type 2 Diabetes.

“HYD is now forced to take legal action against BBB to rectify this continued inaccurate rating, which has harmed our 30 year reputation and has caused irreparable financial damage to our company", says Dr. Hockings, Founder and CEO of Help Your Diabetes.