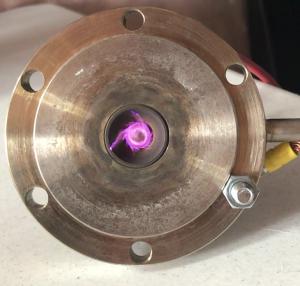 A recent Reuters article stated Alberta is looking to develop a blue hydrogen strategy to replace Natural gas in the extraction process for steam drive oil sands sites. Blue Hydrogen is hydrogen derived from natural gas where the hydrogen is recovered, and the carbon can be captures and stored. The Article quoted Dale McNally the Honorable minster of Natural Gas for Alberta as saying they will announce a strategy no later than October of this year to develop “Blue Hydrogen” as an alternative to natural gas in this process.

Using blue Hydrogen as a feedstock for steam driven extraction will allow Alberta to produce more oil without exceeding the carbon limits.

“This is exciting news for our NT Plasmatron technology which we believe is the perfect technology to meet the needs of this market.” said McLaren. “Our electrical driven technology is more robust and reliable than traditional steam reforming technologies. It’s also far more cost effective and deployable than the alternative. By using internal production of gas we are able to add value by turning the gas into valuable chemicals and C5+ hydrocarbons at a multiple of 3x-4x which is extraordinary in our industry.”

McLaren also said Cycle Energy technologies has recently competed is proprietary power supply for the NT Plasmatron that will revolutionize reforming technology with intelligent control of the process.

In addition, the aforementioned Reuters article stated “the federal government’s draft plan – three years in the making – says several provinces could produce hydrogen, some using renewable energy, and by 2050 the industry could create 100,000 jobs, generate more than C$5 billion in annual revenue and reduce annual greenhouse gas emissions by 100 megatonnes.”

Cycle Energy Industries a Canadian corporation based in the province of Alberta, is a unique energy provider that operates three vertically integrated business units in the WCSB (Western Canadian Sedimentary Basin). We have created a vertically integrated company where each subsidiary creates value and adds support to the other.

Cycle Energy Services supports our Exploration and Production (E&P) team with well services and end of life reclamation which gives the E&P company an unprecedented advantage over its competitors. This business plan excels by providing services that would otherwise be too costly and not financially viable for specific workovers or turn around projects. Cycle Energy Services owns and operates combo wireline-service rigs and Hydrovac Units. The focus of Cycle Energy Services is primarily end of life abandonment and reclamation of non-producing assets. The company excels by supplying fixed cost services via our custom rigs and equipment that results in reduced time onsite, faster rig in and rig out times as well as reduced number of vehicles onsite. Cycle’s efficiencies reduce the amount of fuel burned to complete the abandonment and reduces the carbon footprint to abandon wells.

Cycle Energy Technologies provides both with R&D capabilities as well as previously developed and licensed technologies that aid in increased production, reduced lifting and operation costs as well as gas and oil field intelligence. Cycle Energy Technologies flag ship technology is our mobile GTL (gas to liquid) system we have been developing and is currently implementing a pilot plant. This technology adds value added to the group by using internal production of gas and adding value by turning it into valuable chemicals and C5+ hydrocarbons as a 3-4x multiple which is industry groundbreaking.

This release contains statements that constitute forward-looking statements within the meaning of Section 27A of the Securities Act of 1933, as amended and Section 21E of the Securities Exchange Act of 1934, as amended. These statements appear in a number of places in this release and include all statements that are not statements of historical fact regarding the intent, belief or current expectations of Cycle Energy Industries Inc., its directors or its officers with respect to, among other things: (i) financing plans; (ii) trends affecting its financial condition or results of operations; (iii) growth strategy and operating strategy. The words "may," "would," "will," "expect," "estimate," "can," "believe," "potential" and similar expressions and variations thereof are intended to identify forward-looking statements. Investors are cautioned that any such forward-looking statements are not guarantees of future performance and involve risks and uncertainties, many of which are beyond Cycle Energy Industries Inc.'s ability to control, and that actual results may differ materially from those projected in the forward-looking statements as a result of various factors. More information about the potential factors that could affect the business and financial results is and will be included in Cycle Energy Industries Inc.'s filings with the Securities and Exchange Commission.