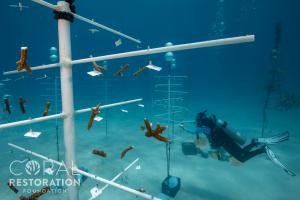 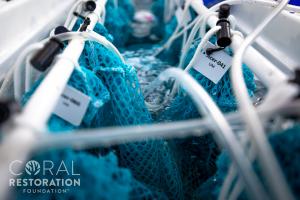 Corals ready for transport to their new homes 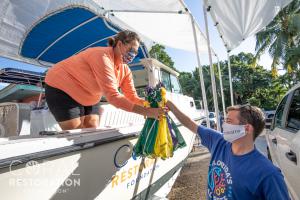 The return of these coral genotypes underscores the importance of these kinds of exchanges – by working together we can ensure that important, diverse genetic material is protected.”
— Jessica Levy, CRF™ Restoration Program Manager

This is the first time that a coordinated coral swap of this kind has occurred, with the same genotypes being exchanged at the same time, to be housed in multiple locations. Supported by a grant from NOAA’s Restoration Center, the exchange provides security for the future of this species, and expands opportunities for research into coral genetics, disease and climate change resilience, and reproduction.

Diego Lirman, associate professor at the University of Miami, explains, "This genotype exchange is clear evidence of the commitment by NOAA and Florida restoration partners to protect and restore Florida's Coral Reef. This unprecedented genotype exchange will create vital genetic repositories, enhance the genetic diversity of restoration efforts, and provide unique research opportunities to aid the recovery of our threatened coral reef ecosystem."

Many of the genotypes involved in the swap are now extinct in the wild. The fact that these are the only living representatives of some of these genets highlights the importance of an exchange of this kind to promote redundancy across restoration systems.

During the swap, CRF™ gave 27 different staghorn genotypes to each of the four collaborating organizations. In return, and between the other four partners, 66 new genotypes of staghorn were introduced to the CRF™ Tavernier Coral Tree Nursery – the largest in the world.

Alison Moulding, a coral biologist with NOAA Fisheries says, "Having redundancy of corals with the same genetic identity in multiple nurseries is important for preserving genetic diversity. By bringing pieces of the same colony into nurseries located throughout the Florida Reef Tract, we can better insure against loss from sporadic events like storms."

STRENGTH IN DIVERSITY
Genetic diversity is critical for ecosystem resilience; genetic diversity is the key to an ecosystem’s capacity to survive episodes of stress including disease outbreaks, warming water, cold upwellings, pollution, and more. As hardy, diverse corals reproduce sexually, their progeny are likely to be increasingly well-adapted to handle changes in the environment.

Since 2017, CRF™ has been returning at least 50 genotypes of staghorn and 50 genotypes of elkhorn to every reef site that we are working to restore. The CRF™ Science Department tracks the survivorship of these different genotypes on the reef and collects data that informs the development of their methods.

“LAZARUS” CORALS
All of the genotypes that were exchanged came from wild colonies, with a couple of these genotypes originating from colonies native to the Dry Tortugas. But a small subset of these corals has special significance for Coral Restoration Foundation™.

These have been nicknamed by some of the CRF™ team as “Lazarus” corals; they are genotypes that used to be homed in the CRF™ nursery, but were lost during stress events, like Hurricane Irma. Thankfully, before the storm, CRF™ shared some of these colonies with Mote Marine Laboratory, and now, through this swap, they are returning to the organization’s ocean-based nursery.

Jessica Levy, Restoration Program Manager at Coral Restoration Foundation™ explains, “The return of these coral genotypes underscores the importance of these kinds of exchanges – by working together we can ensure that important, diverse genetic material is protected, with multiple colonies held in multiple places to safeguard against any potential disasters. We are incredibly pleased to be collaborating with these partners. We are all working towards the same goal of saving and restoring our coral reefs, and by working together, we have more chance of succeeding.”

A BOOST FOR CORAL DIVERSITY IN THE KEYS
The corals coming into CRF™ facilities have been installed on new Coral Trees added to the genetic bank. This brings the total number of genotypes in the CRF™ gene bank to 481 – more than is housed in any other ocean-based coral ark in the world.

Once these colonies are large enough, a selection of them will be propagated and their clones moved into the production area, for eventual release to the reefs of the Florida Keys. The genotypes chosen to be returned to the reefs will be those that contribute the greatest genetic diversity to our outplanting stock.

The researchers involved in the swap all adhered to strict social distancing recommendations as outlined by the CDC. All activities were conducted under permits and guidance from Florida Keys National Marine Sanctuary and the Florida Fish and Wildlife Conservation Commission.