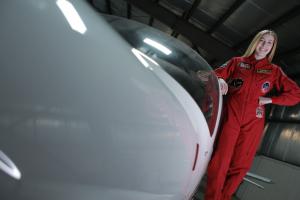 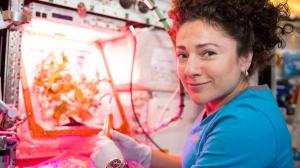 Women and people of color are significantly underrepresented in STEM careers and in the pathways that lead to those careers. I fiercely believe that we will close that gap.”
— Abigail Harrison

MINNEAPOLIS , MN, UNITED STATES , February 29, 2020 /EINPresswire.com/ — The Mars Generation (TMG) today announced that its co-founder, Abigail Harrison, will join Microsoft and NASA at an event at the Museum of Flight in Seattle on March 2, focused on making science, technology, engineering, and mathematics (STEM) opportunities accessible to all. Astronauts aboard the International Space Station, including Jessica Meir, will join via a live In-Flight Education Downlink to share their experiences of working and living in space, and to answer questions from attendees. The downlink for the event will be live streamed online for public viewing. Microsoft and NASA are hosting this event in response to the anticipated 9 million STEM jobs that will be created by 2022, and the desire to see women and minorities accessing those jobs.

The event will kick off Microsoft’s In Culture campaign to honor International Women’s Day on March 8th, and throughout Women’s History Month by recognizing women who are overcoming obstacles and breaking boundaries—with the goal of encouraging young women and girls to pursue their goals without giving up. Harrison, known online as Astronaut Abby, is a leader in STEM who inspires the future by encouraging people of all backgrounds to pursue big dreams.

“Women and people of color are significantly underrepresented in STEM careers and in the pathways that lead to those careers,” said Harrison. “I fiercely believe that we will close that gap, and I am thrilled to be a part of the movement that will do it. Giving young people access to people like astronaut Jessica Meir and the information that she’ll share during this event, can help keep their minds open to the possibilities of what they can do themselves.”

Microsoft is sponsoring Harrison’s attendance at the event as she is known for using her leadership and widespread global influence to increase focus on space exploration as vital to the future of humankind. She has also been vocal about the need for people of all backgrounds to have a seat at the table, and advocates tirelessly for the importance of diverse perspectives being represented in STEM and beyond.

About The Mars Generation
The Mars Generation is a 501(c)(3) nonprofit organization with an advisory board that includes astronauts, engineers, scientists, and professionals from the nonprofit and business communities. Reaching millions of people since 2015, the organization has served students and adults from around the world through programs including the Student Space Ambassador Program, Future of Space Outreach Program, and Space Camp Scholarship Program. The Mars Generation is supported by private donors, members, influencer work, and major corporate sponsors. The Mars Generation aims to excite, educate and inspire all people about the future of human space exploration.
For more information, visit TheMarsGeneration.org.

About Astronaut Abby
At age 13, Abigail Harrison, now commonly known as Astronaut Abby, publicly shared her dream of becoming the first astronaut to land on Mars. Since then, Harrison has worked diligently to stay on course and pursue this dream. Now 22 years old, she is a respected thought leader who is passionate and vocal about space exploration and uses her widespread influence, leadership, and The Mars Generation to foster support and enthusiasm for human space exploration. Harrison has been hailed as one of the most influential people in STEM and has earned accolades for her leadership including Forbes 30 Under 30, Glamour Magazine College Woman of the Year, and TIAA Difference Maker 100.
For more information, visit AstronautAbby.com.