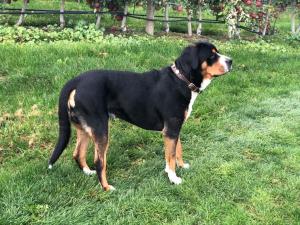 Trusty was treated for osteoarthritis in his left elbow with VetStem Regenerative Cell Therapy by Dr. Kristin Kirkby Shaw of Animal Surgical Clinic of Seattle.

It's really the first time in his life he has been able to run! We are very happy for him, thankful to Dr. Kirkby Shaw for her skills and knowledge and to VetStem Biopharma…”
— Trusty's Owner

POWAY, CALIFORNIA, US, January 14, 2020 /EINPresswire.com/ — Trusty, a purebred Greater Swiss Mountain dog, lives on a 40-acre apple orchard in Washington. At just 14 weeks of age, Trusty walked with a slight limp. He also had difficulty going up and down stairs. His owners noted that even for his breed, he was on the larger side with a long frame and massive paws. As he continued to grow and surpassed 75 pounds, his limp became very prominent and painful. This was especially problematic considering the land Trusty lives on with four very active dog siblings.

Unfortunately, diagnosing Trusty’s ailment was not an easy task. After several efforts with X-rays, CT scans, and ultrasounds which amounted to 10 travel appointments over 8 months, Trusty was referred to Dr. Kristin Kirkby Shaw, a veterinary surgeon at Animal Surgical Clinic of Seattle. After an initial round of consults, imaging, and minimally invasive arthroscopy, Dr. Kirkby Shaw was able to diagnose Trusty with Fragmented Coronoid Process and osteoarthritis as a result of left elbow dysplasia. She recommended surgery in addition to treatment with VetStem Regenerative Cell Therapy.

In August 2019, Dr. Kirkby Shaw collected fat from Trusty’s abdomen in a minimally invasive anesthetic procedure and sent it to the VetStem laboratory in Poway, California. Once received, VetStem lab technicians processed the fat to extract Trusty’s stem and regenerative cells for injectable stem cell doses. Trusty’s stem cell injections were sent back to Dr. Kirkby Shaw and approximately 48 hours after the initial fat collection, Trusty received one injection into his left elbow.

According to his owner, Trusty recovered almost immediately from his surgery and was walking without a limp at 2 weeks post-surgery. Within 6 weeks, Trusty was back to normal and his owner stated he was “doing everything a normal Swiss Mountain Dog his age does! He is running, jumping, sprinting, etc. with the other dogs. Trusty has no limp, pain, or any other issues. We have shared more than a few tears of joy as we have watched him hit milestones in recovery. It's been fun and gratifying to watch him run… with his long legs and large frame he sounds like a horse and his strides are long and fluid. It's really the first time in his life he has been able to run! We are very happy for him, thankful to Dr. Kirkby Shaw for her skills and knowledge and to VetStem Biopharma for providing us with this tremendous healing technology which we know has been a huge factor in Trusty’s recovery.”

Stem cells are regenerative cells that can differentiate into many tissue types, reduce pain and inflammation, help to restore range of motion, and stimulate regeneration of tendon, ligament and joint tissues. In a peer-reviewed study of dogs with chronic osteoarthritis of the elbow, it was found that stem cells reduced lameness and pain.

About VetStem Biopharma, Inc.
VetStem Biopharma is a veterinarian-led Company that was formed in 2002 to bring regenerative medicine to the profession. This privately held biopharmaceutical enterprise, based near San Diego, California, currently offers veterinarians an autologous stem cell processing service (from patients’ own fat tissue) among other regenerative modalities. With a unique expertise acquired over the past 15 years and 17,000 treatments by veterinarians for joint, tendon or ligament issues, VetStem has made regenerative medicine applications a therapeutic reality. The VetStem team is focused on developing new clinically practical and affordable veterinary solutions that leverage the natural restorative abilities present in all living creatures. In addition to its own portfolio of patents, VetStem holds exclusive global veterinary licenses to a large portfolio of issued patents in the field of regenerative medicine.