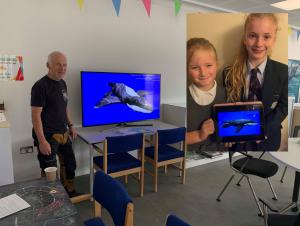 Paleontologist Dr. Steve Etches, founder of the Etches Collection Museum, stands beside “Ava the Pliosaur” in the museum’s Discovery Room. 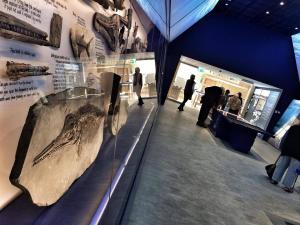 A look inside the Etches Collection Museum of Jurassic Marine Life 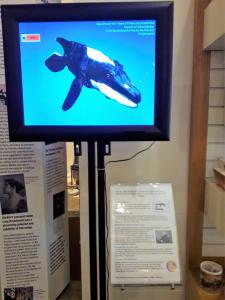 “Ava the Pliosaur” swims as part of the Dorking Museum and Heritage Centre’s fossil display.

The animation for a formal paper on marine reptile locomotion is making waves with museum patrons of all ages.

BUCKINGHAM, PA, US, October 15, 2019 /EINPresswire.com/ — The mystery of how plesiosaurs – those “Nessie-like” four-flippered, long necked marine reptiles from the time of the dinosaurs – swam has perplexed both the public and paleontologists for going on 200 years. How did these mysterious creatures make use of their four paddles for swimming, and what benefits did they derive from them?

Enter “Ava the Pliosaur”, the brainchild of bestselling novelist Max Hawthorne, author of the popular Kronos Rising series of paleo-fiction novels. Named after the author’s daughter, Ava is a scientifically accurate animation swim cycle that demonstrates how a short-necked plesiosaur, known as a pliosaur, swam. The swim cycle was crafted by animator Mathieu LaFreniere and is part of a recently completed study, supporting Hawthorne’s theory on plesiosaur locomotion. The study, and the formal paper that followed, is currently undergoing peer review. It was developed by a team of paleontologists that included Dr. Mark McMenamin, a Professor of Geology from Mount Holyoke College and the founder of the ingenious “Triassic Kraken” theory, as well as fossil hunter Paul de la Salle, discoverer of the “Lilstock Monster”, a section of fossilized Ichthyosaur jaw that suggests that some extinct marine reptiles exceeded even the mighty blue whale in size.

The ideas behind Hawthorne’s plesiosaur theory, as demonstrated by Ava, have captivated the imagination of many. In fact, savvy museums are pouncing on the opportunity to showcase them.

Both The Etches Collection of Jurassic Marine Life, located in Kimmeridge, Dorset, UK, which represents the life’s work of paleontologist Dr. Steve Etches, and the Dorking Museum and Heritage Centre, located in Dorking, England, which houses the fossilized remains of dinosaurs from the surrounding region, have Ava displayed in their respective centers. The swim cycle plays on full-size monitors and shows the pliosaur as it swims from a variety of angles. As a result, whether kids and their parents are enjoying the Etches Collection’s “Discovery Room” or touring the Dorking’s intriguing fossil displays, they can be treated to the sight of a prowling marine beast, the likes of which the world hasn’t seen in over 65 million years.

“I think it’s terrific that museums are taking the opportunity to display what Mark, Paul, and I feel is the most up-to-date info on how plesiosaurs swam,” Hawthorne stated. “It’s a mode of locomotion we haven’t seen since the Cretaceous. Seeing this bus-sized predator up there on the screen, cruising along and looking so natural, it’s a thrill for just about anyone. No matter what age you are, it stimulates learning about these truly wondrous creatures that once ruled the world’s oceans.”