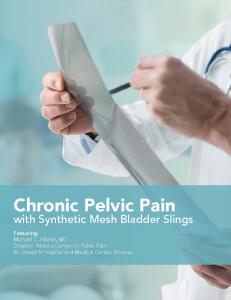 SANTA BARBARA, CA, UNITED STATES OF AMERICA, August 20, 2019 /EINPresswire.com/ — “Serious Complications Associated with Transvaginal Placement of Surgical Mesh in Repair of Pelvic Organ Prolapse and Stress Urinary Incontinence” was the subject of the US Food and Drug Administration Notification on February 23, 2009. Unfortunately, despite this move to protect women’s health, manufacturers including Ethicon, continued to sell the Prolift and Prosima TVM devices, and American Medical Systems continued to sell the Perigee and Apogee TVM devices for years, injuring thousands of women until both companies voluntarily withdrew these products from the market.

On January 4, 2016 the FDA reclassified the polypropylene device used for transvaginal repair of pelvic organ prolapse as a Class III device which identifies them as a high risk device requiring additional data to support the safety and effectiveness for their use. Despite this order, Boston Scientific and Coloplast continued to push their devices, including the Uphold and Restorelle, into the market leading to ongoing injuries to unsuspecting women who likely received insufficient warning of the risk of injury from their providers. Finally, the FDA moved to ban all TVM polypropylene devices used for the surgical management of pelvic organ prolapse on April 16, 2019.

Unfortunately, newly diagnosed injuries for these banned devices are continuing well past the date when they were ‘voluntarily’ removed from the market or directed by the FDA to cease selling them in the United States. Pudendal neuralgia and obturator neuralgia cases are surfacing each week within the United States, occurring as the device degrades and contracts around the nerve either compressing or pulling on the nerves. Other complications include obstructive uropathy resulting in renal failure, chronic urinary infections related to infected mesh that has eroded into the urethra or bladder, or the dreaded fistula from bowel to bladder or from bowel to vagina.

Surprisingly, the American Urological Society (AUGS) has failed to act to recommend removing transvaginal mesh transobturator slings (TOT) and mini-slings from the market as these vaginal devices are placed blindly, do not account for anatomical variations of the obturator and pudendal nerve, and the results of their defective design is foreseeable – acute injuries soon after placement of the device or injuries years after implantation as the device contracts and degrades in the obturator internus muscle as it passes through the obturator foramen near the pudendal nerve and the obturator nerve.

For more information on Neurological Complications of Slings read our Free eBook. For articles, videos, and other valuable resources, visit our Pudendal Educational Portal or https://tvm.lifecare123.com/. We can also be reached at 800-761-9206.