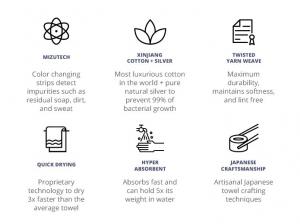 Discover Mizu. Everything you could ever dream of, all in one towel. You’ll wish you discovered it sooner. 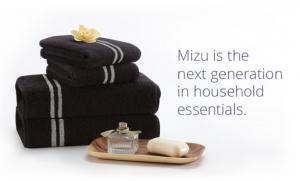 Discover the First Ever Smart Towel 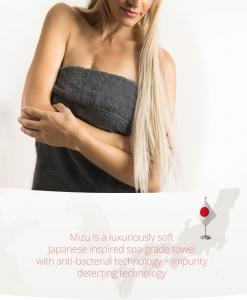 Mizu is the world’s first smart towel that tells you when it’s dirty via color changing stripes that sense impurities.

LOS ANGELES, CA, UNITED STATES, April 16, 2019 /EINPresswire.com/ — Mizu is the world’s first smart towel that tells you when it’s dirty. It has solvatochromic stripes that change color when they come into contact with impurities, so the user knows when to clean it. After months of development and testing by Cornell and MIT laureates, Mizu has launched on ecommerce to great success and steadily increasing demand. Mizu ships worldwide and is available for purchase at www.mizutowel.com.

Consumers and families are more hygiene-conscious then ever before, but many common household items are highly prone to bacterial growth. Mizu was engineered to offer both the luxurious comfort of a high-end towel and the technology to keep bathers cleaner and healthier.

“We are in the midst of a technological Renaissance,” said the founding team of Mizu, “and the middle class is growing worldwide. This means that many consumers across the globe care about hygiene more than, say, their parents or grandparents did, and these consumers are looking to technology to solve their problems. We saw a great opportunity here to create a product that was desirable and that had a positive impact.” Mizu is a modern solution that allows bathers to know, without a doubt, that they are clean after each bath or shower.

Mizu works on two fronts: it prevents bacterial growth and detects contaminants via a color-changing stripe (known as Mizutech). Pure 100% silver is woven into cotton fibers of the Mizu Towel. This all-natural element inhibits bacteria from growing and keeps the towel 99% free of disease-causing microbes. Other impurities like oil, dirt, sweat, and chemicals are detected by the patented Mizutech stripes. These color-changing indicators were developed by a team of textile engineering PhD holders and can only be found on Mizu Towels. When the color changes, it’s time for a wash.

Mizu is also one of the most comfortable towels on the market. It’s made from Xinjiang cotton, widely known as the softest cotton on Earth, and is constructed using Japanese techniques straight from Imabari. In the Towel industry, Imabari is a renowned region where royalty and the uber-elites go for their fabrics and custom clothing.

These Towels are also 50% larger and more absorbent than the average towel on the market. This increased volume allows the bather to dry off easier, rather than having to “scrub” with the towel. That generally means that Mizu stays cleaner for longer.

Mizu is made with safe and natural fibers that are suitable for all ages. Mizu hand and bath towels make brilliant additions to any living space but are also great for travelers and beach-goers who regularly come into contact with foreign contaminants. Thanks to Mizu’s twisted yarn weave, the textiles are incredibly durable and travel-friendly. They dry 3x faster than regular towels, making them ideal for trips to the pool or the gym.

Why do we get sick? Usually, it’s because we are exposed to harmful bacteria or toxins. While we try our best to stay clean, millions of contaminants and microscopic invaders thrive in places we least expect—our bedsheets, blankets, shoes, and towels. These are things we don’t clean enough because we don’t see the bacteria.

The founders of Mizu sought to make the world a cleaner place through a new line of smart fabrics that both resist contamination and also alert the user of when to wash. They successfully developed a prototype smart towel, but they knew that a smart towel alone would not be enough to succeed – they had to make a towel that people actually wanted to buy.

By sourcing the finest cotton and vigorous research, they discovered how to craft a towel that was truly comfortable (it’s not as easy as you think!). This led the Mizu team of doctors and engineers around the globe before they returned with the softest, most durable, and smartest towel on the planet.