INVESTORS WHO BOUGHT BRISTOL-MYERS SQUIBB STOCK BETWEEN JANUARY 27, 2015 AND OCTOBER 9, 2016 HAVE UNTIL APRIL 10, 2018 TO SEEK APPOINTMENT AS LEAD PLAINTIFF.

PHILADELPHIA, PA, UNITED STATES, March 30, 2018 /EINPresswire.com/ — Kehoe Law Firm, P.C. is investigating claims on behalf of investors of Bristol-Myers Squibb to determine whether Bristol-Myers and certain of its officers and/or directors engaged in securities fraud or other unlawful business practices.

KEHOE LAW FIRM, P.C. REMINDS INVESTORS WHO BOUGHT BRISTOL-MYERS SQUIBB (NYSE: BMY) STOCK BETWEEN JANUARY 27, 2015 AND OCTOBER 9, 2016 THAT THEY HAVE UNTIL APRIL 10, 2018 TO SEEK APPOINTMENT AS LEAD PLAINTIFF.

On February 9, 2018, a class action lawsuit was filed against Bristol-Myers on behalf of investors who purchased Bristol-Myers securities between January 27, 2015 and October 9, 2016, both dates inclusive (the “Class Period”) seeking remedies under the Securities Exchange Act of 1934.

Allegedly, throughout the Class Period, BMY made materially false and/or misleading statements, as well as failed to disclose material adverse facts about BMY’s business, operations, and prospects. Specifically, BMY failed to disclose that BMY’s CheckMate-026 trial was more likely to fail than BMY represented; Bristol-Myers’ CheckMate-026 trial failed more severely than Bristol-Myers indicated it did in its August 5, 2016 announcements and disclosures; and, as a result, Bristol-Myers’ statements about its business, operations, and prospects were materially false and/or misleading and/or lacked a reasonable basis. 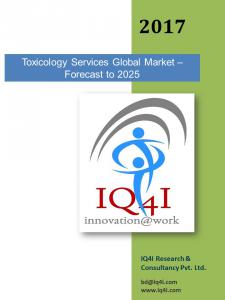 BOSTON, MASSACHUSETTS, U.S., March 30, 2018 /EINPresswire.com/ — Toxicology is the study of adverse effects that occur in living organisms and its environment due to chemicals, physical or biological substances. Toxicology testing regulations are already in place for most of the developed countries across industries such as chemicals, pesticides, consumer goods, medical products, food additives. These toxicology tests are important for the approval of products and with the increased trend, toxicology studies are outsourced across the industries. As estimated by IQ4I Research, the toxicology services global market is estimated to reach $14,343.0 million by 2025 growing at a high single digit CAGR from 2017 to 2025.

With the rise in R&D investments and mandatory toxicology testing along with other factors such as advancements in technology, increased outsourcing trends and private/public sector funding, are driving the growth of the toxicology services market. However, some tests such as the carcinogenicity tests are expensive and take about 1-2 years which furthermore, may not necessarily result in a fruitful outcome. Thus, factors such as, high cost and long durations of studies with no guaranteed results, high capital requirements for GLP certification of the toxicology labs, increased funding towards repurposing, along with opposition to animal testing by animal welfare groups are hindering the market growth.

Among the various end point tests, systemic toxicology segment accounted for the largest share in 2017 and is projected to grow at a mid single digit CAGR from 2017 to 2025. Developmental and reproductive toxicology (DART) is the fastest growing of all the segments. Geographically, North America region commanded the largest revenue in 2017. However, Asia- Pacific region is expected to grow fastest due to favorable government regulations and investments.

With the development of 3D cell culture, the newest technology used for toxicology is the 3D cell culture assays. These 3D cultures assays have many advantages over the 2D cell culture assays as they can mimic the tissue environment nearly close to that of an in vivo tissue. Therefore, they address the limitations of both animals and two-dimensional cultures, and provide more accurate data on the effects of short- and long-term exposure to toxicants. Also, these tests are expected to cost relatively less when compared to the animal tests. Organ-on-chip uses the 3D cell culture technology to the next level. Organ-on-chip is micro-engineered multichannel 3D microfluidic biomimetic system enabled with high resolution, real time imaging and in-vitro analysis of biochemical, genetic and metabolic activities in tissues and organs. Companies such as Insphero offer services for toxicity testing on 3D cell cultures. Although these methods cannot fully replace in vivo testing, they are set to impact the number of animals used for regulatory testing.
The toxicology services market is highly fragmented, however, recent deals such as acquisition of Advinus Therapeutics by Eurofins Scientific in July 2017 reflects on the market trend of acquiring complementary capabilities to provide end to end toxicology services across industries. 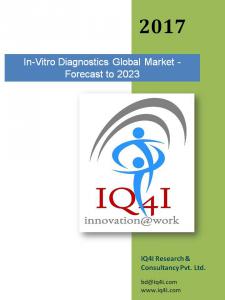 IVD is used to check the state of health, to cure, mitigate, treat or prevent disease. Growing healthcare expenditure,lifestyle diseases are driving the market.

In-vitro diagnostics technologies are differentiated into different types based on the basic phenomenon used for diagnosing; these include immunoassays, clinical chemistry, molecular diagnostics, clinical microbiology, haematology, coagulation & haemostasis, and other IVD technologies. According to IQ4I estimation, the in-vitro diagnostics global market is expected to reach $78,408.6 million by 2023 growing at a mid-single digit CAGR from 2016-2023. Rise in prevalence of infectious and chronic diseases, increasing adoption of point of care testing, emergence of next generation molecular diagnostics, and growing awareness of companion diagnostics and personalized medicine, emergence of minimally invasive and non invasive diagnostics and rising number of CLIA waived IVD tests are contributing to the stable growth of IVD market. However, rising incidence of product recalls in the past year, lack of skilled laboratory technicians in developing nations, inadequate reimbursements, and unorganized regulatory framework are causing the market to slow down.

The in-vitro diagnostics market is segmented into technology, applications, products, sample type, end users and by geography. Among the various technologies immunochemistry occupies major share in the global technology market and molecular diagnostics surpassed all the technologies with a mid single digit CAGR during the period of 2016-2023. Transplantation diagnostics has emerged as the fastest growing application growing with a double digit CAGR due to the advent of HLA specific assays, which could precisely detect the organ compatibility and provide useful results in minimal time. The infectious disease testing occupied the largest share in the global applications market due to the high rate of sexually transmitted diseases such as HIV, Chlamydia, Gonorrhoea, and Syphilis.

Blood test is the most commonly used sample type which gives very precise results and provides useful insights on the disease diagnosis. Among the various samples used in IVD testing, blood sample occupied the biggest share in the IVD global market and is the fastest growing sample type. Other sample types such as urine are collected by non-invasive methods and are used for specific tests which include some of the clinical chemistry tests and more popularly pregnancy tests. Saliva tests have been performed for testing HIV, hypogonadism, measles, hepatitis and oral cancers. The OraRiskHPV test by Oral DNA labs is a non-invasive, easy-to-use screening tool for identification of oral HPV, a mucosal viral infection that could potentially lead to oral cancer.

Among the different product types, reagents contributed to the largest share and are the fastest growing product segment due to high demand of assay kits and comparative lower sales of assay instruments due to their high life span.
In-vitro diagnostics find their end users in hospitals, laboratories, academics and research centres, home care and others. Hospital occupied a major share and is the largest segment in the end users global market and home care is predicted to be the fastest growing with a high single digit CAGR from 2016-2023.

The IVD market is dominated by four major players namely Hoffman La Roche, Abbott Laboratories, Siemens AG, and Danaher Corporation which occupy a significant share of the total market share. Further the companies are acquiring other significant players in the market to retain their leadership in the market. For instance, in November 2016, Danaher Corporation acquired Cepheid for approximately $4 billion transforming its molecular diagnostics portfolio and bringing a double digit growth for the already flourishing diagnostics business of Danaher.

Market segment by Type, the product can be split into
Sprays
Drops & Liquids
Powders
Gels

Market segment by Application, Nasal Delivery can be split into
Allergic And Non-allergic Rhinitis
Nose Congestion
Vaccination
Other Therapeutic Applications

If you have any special requirements, please let us know and we will offer you the report as you want.

On the basis of the end users/applications, this report focuses on the status and outlook for major applications/end users, consumption (sales), market share and growth rate for each application, including
Automotive
Building & Construction
Tires and Tubes
Wires & Cables
Lubricant Additives

On the basis of product, this report displays the production, revenue, price, market share and growth rate of each type, primarily split into
Atrial Fibrillation
Sinus Node Dysfunction
Atrioventricular Block
Others

On the basis of the end users/applications, this report focuses on the status and outlook for major applications/end users, consumption (sales), market share and growth rate for each application, including
Hospitals
Ambulatory Surgical Centers
Other

Black silicon carbide consists of crystalline silicon carbide, which is produced from silica sand and petroleum coke in electric resistance furnaces at temperatures of > 2.300 °C. Silicon carbide is iron-free, angular and extremely hard.

Scope of the Report:
This report focuses on the Black SiC in global Market, especially in North America, Europe, Asia-Pacific, South America, Middle East and Africa. This report categorizes the market based on manufacturers, regions, types and applications.

Atomized iron powder is molten iron or iron alloy treatment by high-pressure water mist, is a new variety of iron powder, with no impurities in the production process, relatively pure, spherical particles made by the atomizing method, it is the best raw materials of mechanical parts.

Scope of the Report:
This report focuses on the Atomizing Iron Powder in global market, especially in North America, Europe, Asia-Pacific, South America, Middle East and Africa. This report categorizes the market based on manufacturers, regions, types and applications.

Market Segment by Applications, can be divided into
Powder Metallurgy
Welding
Chemical
Other

Scope of the Report:
This report focuses on the Anthracite in global Market, especially in North America, Europe, Asia-Pacific, South America, Middle East and Africa. This report categorizes the market based on manufacturers, regions, types and applications.

Formic acid is used abundantly since it is an eco-friendly alternative to textile, leather, rubber, and other industries. The excellent properties of a formic acid, when it comes to controlling acidity while effectively controlling microbial growth, makes it ideal for use in a broad spectrum of applications. Furthermore, formic acid, unlike other acids (organic), holds the advantage of performing as both carboxylic acid and aldehyde. Therefore, formic acid functions as a reducing and as an acidifying agent, which offers the market immense potential and scope to be used across a wide range of industries.

Covered in this report
The report covers the present scenario and the growth prospects of the global formic acid market for 2017-2021. The report presents a detailed picture of the market by way of study, synthesis, and summation of data from multiple sources.

The market is divided into the following segments based on geography:
• APAC
• EMEA
• North America
• ROW

The Global Formic Acid Market 2017-2021, has been prepared based on an in-depth market analysis with inputs from industry experts. The report covers the market landscape and its growth prospects over the coming years. The report also includes a discussion of the key vendors operating in this market.

Market driver
• Rising demand for formic acid as a preservative
• For a full, detailed list, view our report

PART 02: SCOPE OF THE REPORT